This article first appeared in Bloomberg on 19 Oct 2017.  As usual, BBTE Club comments are in red text.

Property, overseas investments and shadow-banking products have all been targeted by China’s campaign to curb financial risks over the past year.

Some analysts are betting that restrictions on other popular investment channels will lure what’s often called China’s giant ball of money back into stocks, which, despite steady gains, have seen a slow take up in volumes since a spectacular boom and bust in 2015.

Chinese equity holdings will swell by up to 11 trillion yuan ($1.7 trillion) in the 2 1/2 years through end-2019 amid policies to clean up the financial system, Morgan Stanley predicts. 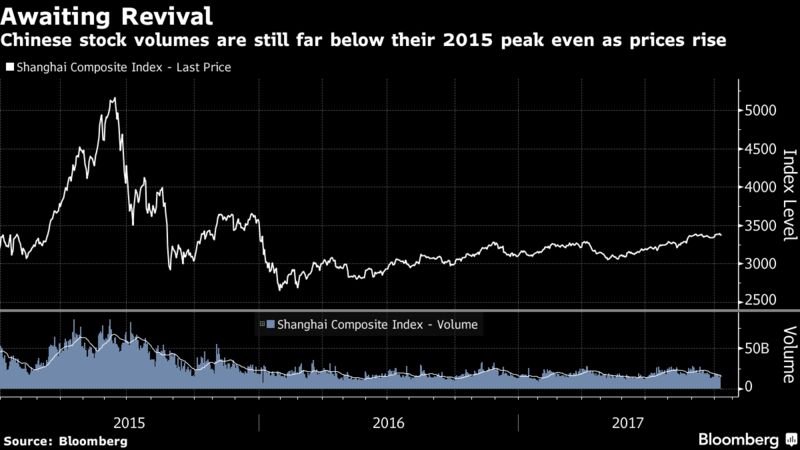 For China, a reinvigorated stock market has the benefit of reducing the economy’s reliance on debt — while also creating the risk of another speculative frenzy.

This time around, however, there’s a stronger fundamental case for stocks: economic data and earnings have improved, and the government has had some success in lowering leverage in the financial system.
“Economic fundamentals are improving, valuations are OK and there’s a global phenomenon of low volatility — that’s why stocks are in an ideal environment to heal,” said Hao Hong, chief strategist at Bocom International Holdings Co., who predicted the market’s peak and trough in 2015.
“But to speak of frenzies in stocks again, only two and a bit years away from 2015, it’s probably a little too early.”

China’s growing wealth has been known to whip up periodic manias in various assets from stocks and homes to commodities and bitcoin, as investors seek to dodge the regulatory whack-a-mole.

The government’s campaign to curb financial risks has intensified over the past year, targeting many of the nation’s most popular investment channels.

In a speech kicking off the 19th Party Congress on Wednesday, President Xi Jinping said China will continue to strengthen financial regulation and defend against systemic risk.

He reiterated that housing is for living in, not speculation.

Yet despite the curbs, Chinese people who don’t own homes are still likely to prioritize property purchases, and the wealthy to seek overseas investments, said Thomas Deng, chief China strategist at UBS Wealth Management.

Domestically, equities are a good choice for wealth growth, while bonds’ appeal is their liquidity, Deng added.

“Attention is being paid more to earnings quality and also good companies,” he said.

“At the end of the day, the incentive to invest in the stock market is driven by not so much by liquidity but by the prospect of economic growth, which has kind of stabilized.”

He predicts both onshore and offshore Chinese markets will keep rallying, and buying will spread to small caps.

Onshore equities remain are far from the heady days of 2015.

The Shanghai Composite Index has risen 8.5 percent this year, lagging a long way behind gains in Asian and offshore Chinese stocks.

While the balance of margin debt has climbed back toward 1 trillion yuan, it’s been roughly flat as a percentage of market capitalization for most of this year. New investors have not rushed in.

And with the deleveraging campaign slowing money supply growth, stocks may not be entirely insulated either.

Bonds and small-cap shares slumped this week after Zhou’s comments, with the 10-year sovereign yield jumping to the highest since December 2014 and the ChiNext index of smaller companies falling 3 percent over three days.

“You can say the equity market is one of the only channels through which you can really absorb significant redirected flows,” said Logan Wright, Hong Kong-based director of China markets research at Rhodium Group LLC.

“But at the same time if you’re seeing a monetary aggregates slowdown, it’s hard to see why equities are necessarily supported in that environment.”

To Morgan Stanley, a combination of solid market fundamentals and curbs on alternatives will lure money back into equities.

But the inflows will be less dramatic — which is probably what policy makers prefer.

“This will be a lasting but somewhat gradual process, unlike the boom in 2015.”

SELL US AIRLINE STOCKS?
Next
US STILL THE LARGEST WORLD ECONOMY?

Bloomberg Intelligence analysts identified 50 publicly traded companies—out of the 6,000 they track—worth special attention because they plan to release significant products and services in the coming year or because they face unusual challenges. To assemble the list….

Each year the International Monetary Fund projects gross domestic product per capita—a rough measure of living standards—for almost every country in the world. The annual shifts aren’t big, although notice that China has gradually improved from poor to lower-middle-income. The country outlooks are based….

The big story for 2018 is likely to be how to manage the continued expansion. A turning point may come at the end of September, when the European Central Bank might stop or curtail monthly bond purchases. The Japanese will keep buying, the Americans and soon the Europeans are betting that….

What’s the most powerful country in the world? There’s a good case to be made that it’s China. There are many kinds of power — diplomatic, cultural, military and economic. So an easier question to ask is: What’s the world’s largest economy? That’s almost certainly this country called…

Risk and Disclaimer Statement
Bulls & Bears Trading Education Club (BBTE Club) is an Education Club set up to train, educate and share among its like-minded thinking members in mainly among others, trading psychology and the use of technical indicators or other statistical information via the use of mathematical algorithm or trading software to identify market trends, opportunities, risks and conditions. We are a training and educational firm in the use of advanced and specialised trading techniques and strategies based on such software or technical and mathematical algorithm calculation analysis. All analysis and information provided by us are for training and simulation purposes only to demonstrate the use of such software or technical analysis methods and are only for general information and should not be construed as an investment advice or a recommendation to you or anybody else at any time or in whatever circumstances to buy, hold or sell any specific financial securities or markets. Please note that we are not investment advisers and we do not provide investment advisory or services whether implied or express in our materials. You must seek advice or help from a licensed regulated professional or investment adviser mandated by law if you require investment advice or services. You should also consult with your licensed investment adviser before attempting any real-life trading or investments in the marketplace. Please read, understand and agree with our full "Risk And Disclaimer Statement" here and our full Terms of Service at this website before you choose at your own free mind and consideration to use any information at our website, newsletter or in any of our communication with you at your own sole risk and reward.

Use this form to find things you need on this site

Join As A Free Member

Join BBE Club and get loads of free tips, techniques and reports from us every day! You will love the educational info and tips that you get from us.